We Are the Ship: The Story of Negro League Baseball 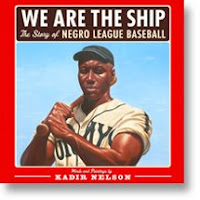 We Are the Ship: The Story of Negro League Baseball

Written and illustrated by: Kadir Nelson

" The story of Negro League baseball is the story of gifted athletes and determined owners; of racial discrimination and international sportsmanship; of fortunes won and lost; of triumphs and defeats on and off the field. It is a perfect mirror for the social and political history of black America in the first half of the twentieth century. But most of all, the story of the Negro Leagues is about hundreds of unsung heroes who overcame segregation, hatred, terrible conditions, and low pay to do the one thing they loved more than anything else in the world: play ball. Using an "Everyman" player as his narrator, Kadir Nelson tells the story of Negro League baseball from its beginnings in the 1920s through its decline after Jackie Robinson crossed over to the majors in 1947. The voice is so authentic, you will feel as if you are sitting on dusty bleachers listening intently to the memories of a man who has known the great ballplayers of that time and shared their experiences. But what makes this book so outstanding are the dozens of full-page and double-page oil paintings--breathtaking in their perspectives, rich in emotion, and created with understanding and affection for these lost heroes of our national game."

Selavi, That is Life: A Haitian Story of Hope 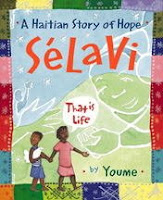 Selavi, That is Life: A Haitian Story of Hope

"Through the story of one Haitian child, this stirring picture book puts a human face on news images and tells of young people caught up in the terror of war at home. Selavi finds family with a group of other street children. Helped by a church, they build a shelter. After "others" set fire to the building, the house is rebuilt, and the children start a radio station to reach young people. The simple watercolors show the boy alone, then the warmth of his community and the angry faces of men in uniform. In a moving afterword accompanied by her own documentary photos, Youme, as she's identified on the jacket, tells more of the story, which is based on the experience of homeless kids in Port-au-Prince."

The Best Eid Ever

The Best Eid Ever

"It's Eid, and Aneesa should be happy. But her parents are thousands of miles away in Saudi Arabia for the Hajj pilgrimage. To cheer her up, her grandmother gives her a gift of beautiful clothes from Pakistan, one outfit for each of the three days of Eid. She even prepares lamb korma, Aneesa's favourite dinner, which they will enjoy when they return from prayers. At the prayer hall, Aneesa meets two sisters who are not dressed in new clothes for the holiday.Aneesa discovers that the girls are refugees. With their father, they have fled from their war-torn country. Aneesa can't stop thinking about the girls and what Eid must be like for them. That's when Aneesa comes up with a plan to help the girls celebrate Eid and make it the best Eid holiday ever."

Sami and the Time of Troubles

Sami and the Time of Troubles

"Ten-year-old Sami lives in Beirut, Lebanon. Because of gunfire and bombing in the streets, he and his family spend much of their time in the basement of an uncle's house. There they listen to the radio or stare at the carpets Sami's mother insisted on bringing along as reminders of a normal life. Heide and Gilliland's lyrically written, haunting story makes clear that war threatens not only physical existence but affects the human spirit as well."

http://www.lessonplanspage.com/LAWritingLetterToIraqiBookCharacterSami36.htm
Posted by Jennie's Book Reviews at 2:19 PM No comments:

The Flag of Childhood: Poems From the Middle East

The Flag of Childhood: Poems From the Middle East

"In this stirring anthology of sixty poems from the Middle East, honored anthologist Naomi Shihab Nye welcomes us to this lush, vivid world and beckons us to explore. Eloquent pieces from Palestine, Israel, Egypt, Iraq, and elsewhere open windows into the hearts and souls of people we usually meet only on the nightly news. What we see when we look through these windows is the love of family, friends, and for the Earth, the daily occurrences of life that touch us forever, the longing for a sense of place. What we learn is that beneath the veil of stereotypes, our human connections are stronger than our cultural differences."

The Roses in My Carpet 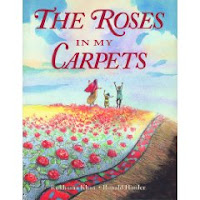 The Roses in My Carpet

"This realistic story follows a day in the life of a young Afghani refugee who takes solace in the beautiful carpets he weaves. In a recurring nightmare, the boy narrator flees with his mother and younger sister, Maha, from the bomber planes that killed his father, then awakes to find himself in a safe but impoverished camp. At dawn, a muezzin calls him to prayer; he then attends school, followed by another call to prayer and finally goes off to his long-awaited practice of carpet weaving. For him, weaving is a skill that ensures "my family will never go hungry" and an outlet that allows him to create a world of color and beauty." 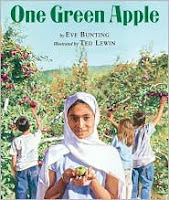 "As a Muslim girl rides in a hay wagon heading to an apple orchard on a class trip, the dupatta on her head setting her apart, she observes that while some of the children seem friendly, others are not. Her father has explained, …we are not always liked here. Our home country (never named in the story) and our new one have had difficulties. Later, when she puts a green apple into the cider press instead of a ripe red one as her classmates have done, they protest. But the cider from all their apples mixed together is delicious–a metaphor for the benefits of intermingling people who are different." 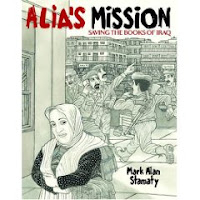 "The story of Iraqi librarian Alia Muhammed Baker, who, fearing looting and bombs, hid more than 30,000 books prior to the invasion of Iraq, is so compelling that two author-illustrators have retold it: Jeanette Winter, in her parable-like picture book The Librarian of Basra, and Stamaty, in this graphic novel. Sequential panels concisely depict complex sequences of actions and emotions, allowing Stamaty to pack more detail into 32 pages than is possible in a traditional picture book."

http://www.teachablemoment.org/elementary/iraqstudyguides.html
Posted by Jennie's Book Reviews at 1:55 PM No comments:

The Librarian of Basra: A True Story from Iraq 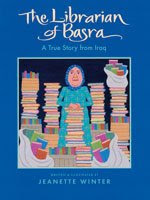 The Librarian of Basra: A True Story From Iraq

Written and Illustrated by: Jeanette Winter

"When war seemed imminent, Alia Muhammad Baker, chief librarian of Basra's Central Library, was determined to protect the library's holdings. In spite of the government's refusal to help, she moved the books into a nearby restaurant only nine days before the library burned to the ground. When the fighting moved on, this courageous woman transferred the 30,000 volumes to her and her friends' homes to await peace and the rebuilding of a new library. In telling this story, first reported in the New York Timeson July 27, 2003, by Shaila K. Dewan, Winter artfully achieves a fine balance between honestly describing the casualties of war and not making the story too frightening for young children. Although the invading country is never mentioned, this is an important story that puts a human face on the victims of war and demonstrates that a love of books and learning is a value that unites people everywhere."

http://www.teachablemoment.org/elementary/iraqstudyguides.html
Posted by Jennie's Book Reviews at 1:47 PM No comments: